Start › You can leave your head on › Borneo 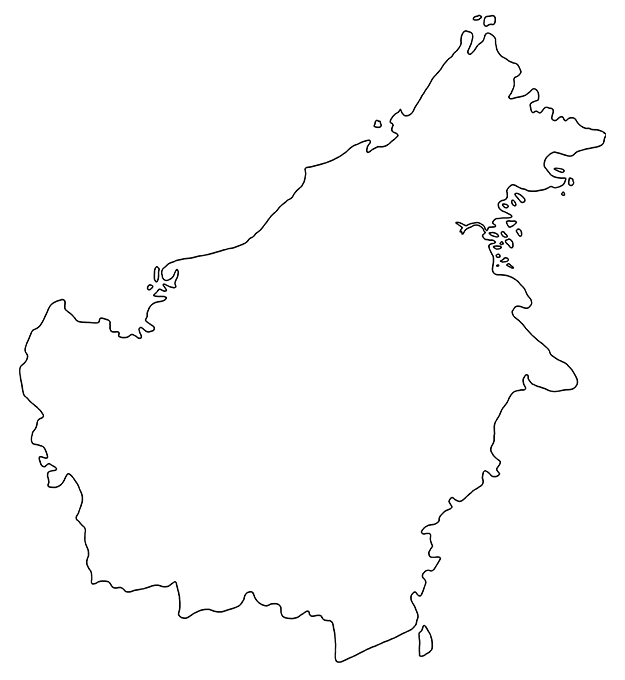 Borneo is the largest island in Asia and the third largest island in the world after Greenland and New Guinea and is more than twice the size of Germany. It is inhabited by about 18.5 million people, of whom about 3.5 to 4 million consider themselves Dayak. The country covers an area of 740,000 square kilometres and is divided politically between three states: the Sultanate of Brunei Darussalam in the north, Malaysia with its states of Sabah and Sarawak in the north and west, and Indonesia with the Kalimantan region in the south and south-east. More than two thirds of the island belong to Kalimantan. Borneo differs from the rest of the Indonesian archipelago in the absence of volcanic activity. The country, which until a few decades ago was almost completely covered by a mighty, almost closed primeval forest, is divided by the large rivers, the largest of which, the Kapuas, is about the same size as the Rhine. Settlement, originally from southwest China, took place along these rivers. During the Song period (960 – 1279), the sea route between Borneo, China and the Philippines was gradually extended. During this time, stronger Chinese influences were also noticeable on Java, and the same may be assumed for Borneo. During the Majapahit period (14th century), the coastal states of Borneo maintained intensive relations with trading Chinese. Place names also often indicate a Chinese presence. The name Kinabatangan means “Chinese River”, and Mt Kinabalu (the highest mountain in Indo-Malaysia at about 4100 metre) is called “Mountain of the Chinese Widow”. All this, together with the archaeological findings, indicates an intensive relationship with China since early historical times.

The Dayak, who are considered the indigenous population of Borneo and Kalimantan respectively, belong to the Austronesian speaking groups. The Austronesian languages form a very widespread language family with a total of about 1150 languages spoken by about 300 million people. Characteristic for the way of life of all Dayak is that they settle along the rivers and cultivate dry rice. This goes hand in hand with a basically common world view and religious concepts. In the coastal area of Borneo, the Malay-Muslim population dominates the ethnic scenario. In the interior of Sarawak and Kalimantan, along the rivers Kayan, Matakam, Rajang and Baram, the tribes of the Kayan and Kenyah settle. The highlands of central Borneo are home to the Lun Dayan and Lun Dayeh, commonly known as Murut, a rather imprecise term applied primarily to the inland inhabitants of Sabah. The Kenyah are often grouped together with the Kayan to form the Bahau ethnic group. Traditionally, all Bahau-Dayak live in long houses and practice slash-and-burn agriculture. Their language belongs to the group of the Kayan-Murik languages, which comprises about 16 languages. The ethnical-geographical generic term Bahau refers to populations between 25.000 and 30.000 people for each group. Malay, Javanese and other Dayak call them orang ulu or “upstream people”; orang asli (“real people”).

The Iban-Dayak are one of the largest Dayak groups in terms of numbers. They are based in West Kalimantan, Sarawak, Brunei and Sabah and were once considered aggressive and mobile headhunters. The continued expansion of the Iban and Kenyah can also be traced back to shifting cultivation, which forced each longhouse community to move on about every ten years in order to gain new rice cultivation areas from the primary jungle through hard work.

In central Kalimantan, the large group of Ngaju-Dajak (about 400.000 people, divided into eight Haptt tribes) is based in the vicinity of the Ot Danum, Manayan and Luangan, which are hardly distinguishable from them, on the Barito River. These four groups are very close to each other linguistically and in other respects, and their economic system is no different from that of the Bahau. The Dusun or Kadazan-Dayak, on the other hand, show clear linguistic and cultural proximity to the south of the Philippines; they are also partially Muslim. The larger groups also include the Melanau in Sarawak and various groups along the Mahakam River, Tunjung and Lawangan. A total of some 3.5 million inhabitants of Borneo are counted among the Dayak groups. “Punan”, on the other hand, refers to a large number of smaller groups; jungle dwellers who feed on hunting and forest fruits as well as wild sago, sometimes also on fishing. This includes a group of smaller ethnic groups which apparently have even older roots in Borneo than the Dayak, e.g. Ot, Ukit or Bukit or Bukitan etc.

The religion and cosmology of the Dayak- is summarised under the name kaharingan. It can be seen as a form of animism, in many ways comparable to the shinto (“way of the gods”) in Japan. The name was introduced in 1944 by Tjilik Riwut during his time as colonial officer of the Dutch East Indies in Sampit. Under the New Order of the Suharto regime in 1980, kaharingan was designated as a form of Hinduism because the Indonesian state only recognises six forms of religion: Islam, Protestantism, Catholicism, Hinduism, Buddhism and Confucianism. The integration of kaharingan into Hinduism is not due to similarities in the theological system, but because it is the earliest form of belief in Kalimantan, just as Hinduism is the oldest “high religion”. In contrast, kaharingan is not considered a religion in Malaysia and Brunei; the traditional Dayak belief systems (in this case primarily Iban and Kenyah, as well as Bidayu) are considered “people’s animism” or “paganism”, in the (pejorative) sense of superstition.

The most important form of organisation in everyday life is the longhouse. The construction on hardwood piles (belian) can be hundreds of metres long. Usually it is situated on a terraced riverbank. The private sections are reached through the public platform or veranda. The length varies from just over 100 metres to over 500 metres. There is a door for each family. It seems that longhouses were built out of necessity or necessity for defence. The public area in the front half runs along the entire length of the longhouse and is not interrupted by walls or other demarcations. From an architectural point of view, it is thus ultimately a gallery. The private living spaces are lined up along this gallery in the rear part of the nave. The internal structure of a nave is thus very similar to western terraced houses or the typical construction of American motels. The fields can be several hours’ walk from the nave; in this case, field huts are used seasonally.

The three most important activity cycles on Borneo, with which headhunting is directly connected, are rice cultivation, burial and initiation. Initiation ultimately means a “briefing” of the soul and the anticipation of death or the soul’s journey into the underworld, from which all life comes. Fertility and killing in the context of kajau, the headhunting, are thus directly related. The participation in the essential rites of passage is proven by tattoos. There are, for example, childbed tattoos, because pregnancy is just as dangerous as war and is appreciated in the same way.

The main groups of the Dayak in Kalimantan. Sarawak and Brunei are inhabited inland mainly by Iban, Bidayuh, Murut and Maloh-Dayak. 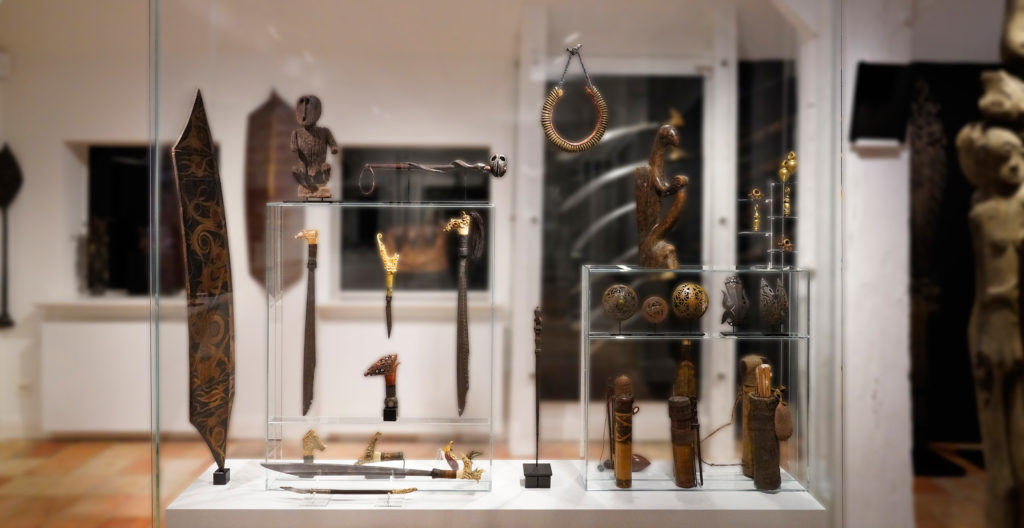 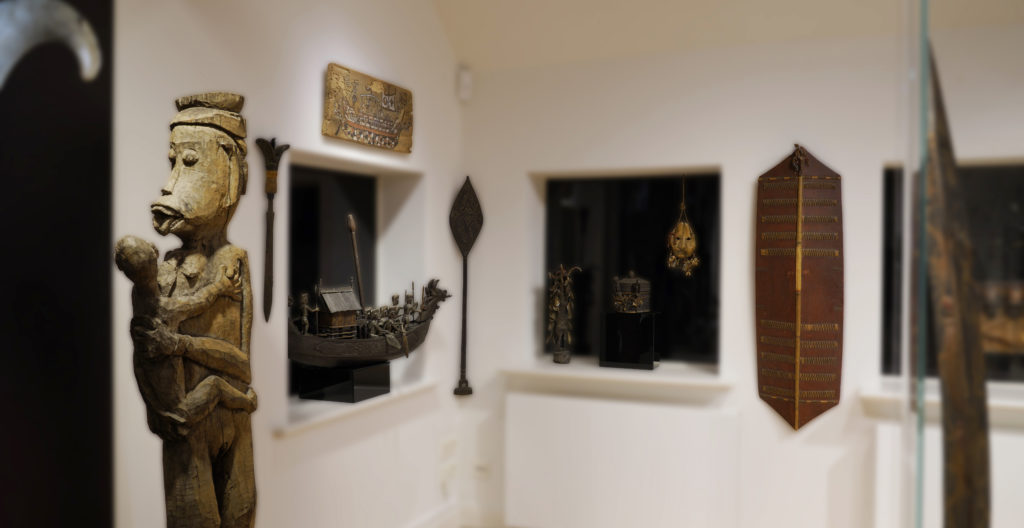 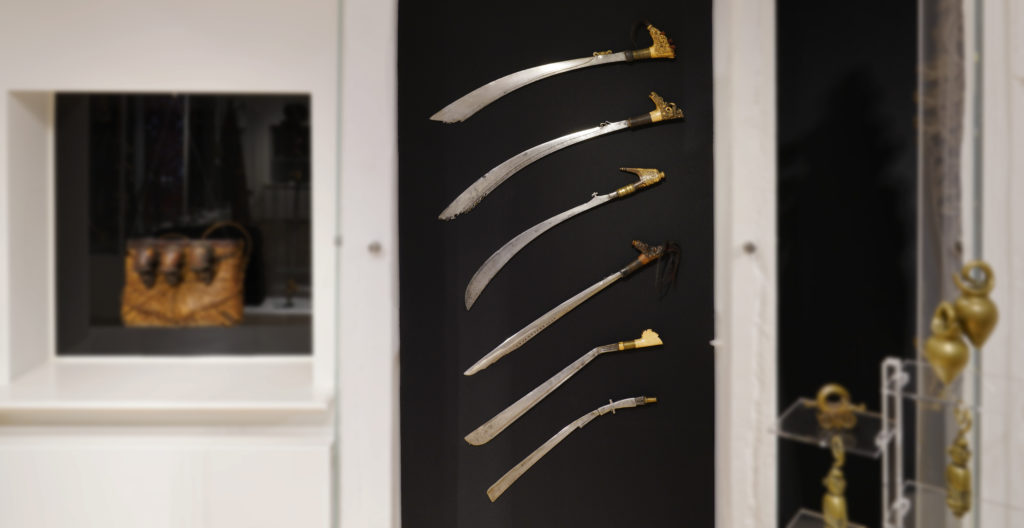 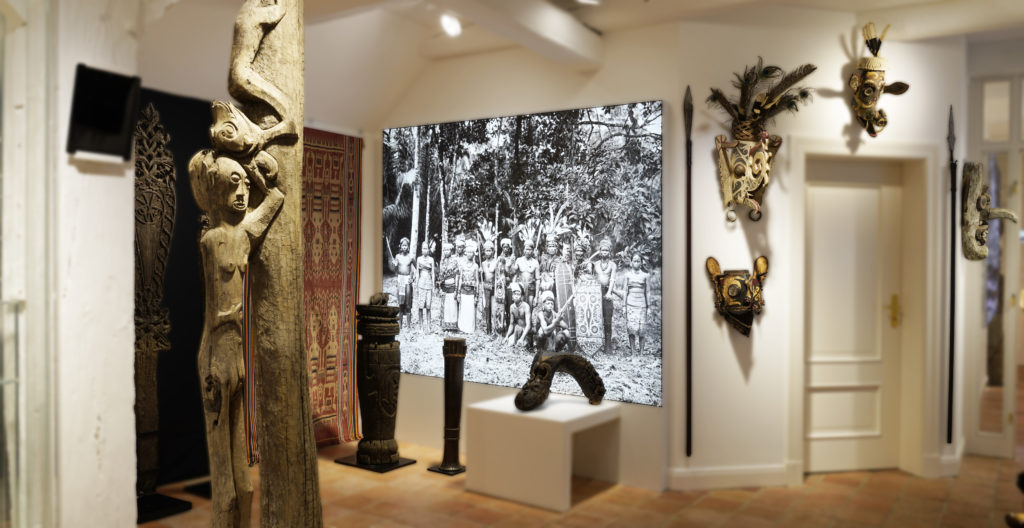