Start › You can leave your head on › Formosa 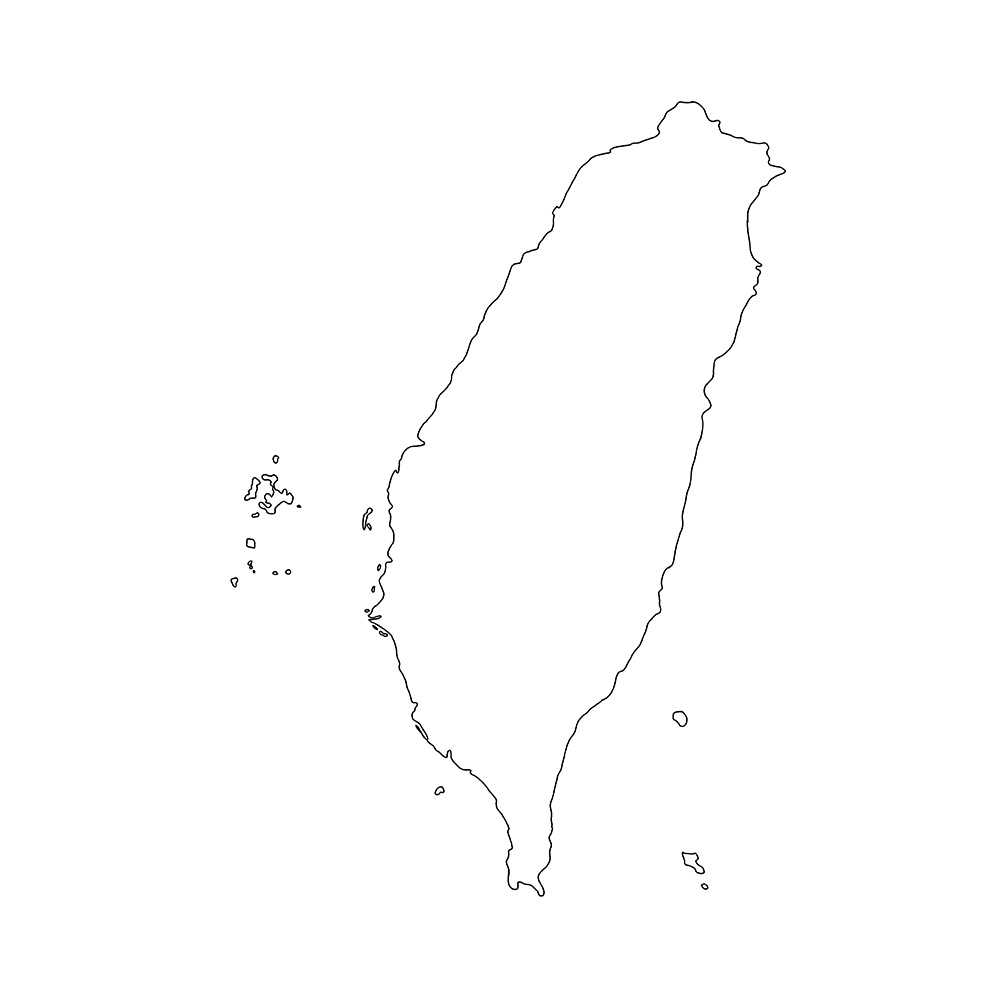 The island of Taiwan is 394 km long and 144 km wide. Taiwan’s land area (35,801 km²) corresponds almost exactly to the area of the German state of Baden-Württemberg (35,752 km²). Taiwan is separated from mainland China by the Taiwan Strait, 130 km wide at its narrowest point, and from the Philippines by the Strait of Luzon in the south. In the north-east the island is connected to the Ryukyu Islands, a chain of islands belonging to Japan, which separate the East China Sea from the Pacific Ocean. To the southwest of the island lies the South China Sea and to the east the open Pacific Ocean. Taiwan was formed about five million years ago as a result of the collision of the Eurasian and Philippine plates. During the last cold period (110,000 to about 10,000 years before today) in the Late Pleistocene, sea levels were at times well over 100 metres below today’s levels, giving Taiwan a direct land connection to the main Asian continent. It was over this land bridge that the first humans reached today’s Taiwan about 30,000 years ago.

About two-thirds of Taiwan consists of mountain massifs, which are divided into five mountain ranges and extend from north to south over the eastern half of the island. The western part of the island is a flat, densely populated plain, crossed by rivers, which allows intensive agricultural use. This plain was the main destination of the Chinese, who migrated in large numbers from the 17th century onwards, and it provided excellent conditions for growing wet rice. Towards the east, this plain rises up to the central mountain range, which has over 200 peaks at more than 3,000 metres above sea level. In its centre is Mount Yushan, the highest peak on the island at almost 4000 metres above sea level. The mostly narrow valleys are flanked by steeply rising slopes and have been made agriculturally usable for tea and fruit growing in centuries of landscape design up to over 2,000 metres above sea level by terracing. The landscape is partly spectacular and the reason for the Portuguese name Ilha Formosa, “famose” or “magnificent” island.

Taiwan has played a special role in human history. The oldest human artefacts on Taiwan were found in caves on the east coast. In 1972, human bone fragments were found in the Zuozhen district of Tainan, which were dated to between 20,000 and 30,000 years old. The Neolithic period was characterised by agriculture and a megalithic culture that built menhirs and constructed tombs out of stone boxes – a cultural feature that is also widely spread in Indonesia and the Philippines. The Neolithic cultures of Formosa show very clear similarities with those of southern Japan. The geographical proximity to Japan explains the obvious cultural similarities. These only recede into the background in the course of the establishment of the Sino-korean influenced Yamato culture in the course of the first millennium. There are only scarce sources about Taiwan’s contacts with mainland China before the arrival of the Europeans. During the Song and Yuan dynasties (10th – 13th centuries), the Pescadores located west of Taiwan were integrated into the Chinese Empire and assigned to the province of Fujian. In 1517 the Portuguese “discovered” (from a European point of view) the island and christened it Ilha Formosa – “Great Island”. In 1624 Dutch sailors and the Dutch East India Company occupied the south of the island and made Tainan the capital. In 1626 the Spanish conquered the north of Taiwan and established settlements near Keelung and Tamsui, but were ousted again by the Dutch in 1641. The Chinese Ming loyalist Zheng Chenggong (Koxinga) defeated the Dutch in 1662 and ended European colonial rule. After the end of the first Sino-Japanese war in 1894/95, China had to cede the island of Taiwan to Japan in the Treaty of Shimonoseki. The Japanese established a 50-year colonial rule (1895-1945), which pursued the systematic economic development and exploitation of Taiwan – the cornerstone of today’s “high-tech economy” in Taiwan.

There is a fundamental cultural difference between Taiwan, which is ostensibly Chinese in appearance, and the indigenous people of Taiwan-Formosa, who are referred to by the Chinese with a slightly derogatory aftertaste as ketagalans, “highlanders”. The cultural similarity of these groups with the inhabitants of Okinawa in the north and Luzon in the south is unmistakable. It refers to almost all areas of spiritual and material culture. The southern Taiwanese Paiwan are one of the largest indigenous peoples in Taiwan in terms of numbers. With a population of about 100,000 people, the Paiwan are Taiwan’s third largest indigenous people after the Ami and Atayal. The neighbouring Bunun, Rukai and Siraya are culturally comparable to them. Like all indigenous peoples of Taiwan, the Paiwan are also among the Austronesian peoples. Divided into a number of smaller ethnic groups, the Paiwan, like the Atayal in the north, have been pushed into the higher-lying interior, especially since the 17th century, by subsequent Chinese invaders over the centuries. Here, however, one should not actually speak of “conquest” or invasion by the latter, but rather of overlapping and ethnic shifts. The Paiwan are divided into two larger groups, the Raval and the Butsul, which in turn are made up of a number of individual village communities. Most Paiwan live in the mountains of southern and central Taiwan. Their settlement area stretches from the Damumu Mountains in Taiwan’s central mountain range in the north to the southern tip of the island to the coast of Taitung County.

The name Paiwan is said to derive from a myth. According to this myth, the Paiwan are said to have originally lived in a sacred area called Paiwan in the Dawu Mountains in Formosa and then migrated south. The name was then applied to the emigrants. According to other sources, pai wan simply means “human”. The paiwan, who speak their own language (paiwan), make up almost one fifth of the indigenous population of Formosa. The Atayal, also known as Tayal or Tayan, are the second largest of Taiwan’s indigenous peoples after the Sinaiised Ami. The Sediq and Kautas in their neighbourhood have largely comparable cultural characteristics. The meaning of the word “Atayal” is “real man” or “courageous man”. The Atayal mostly live in the northern part of the Taiwanese central mountains and make up almost a quarter of all members of Taiwan’s indigenous peoples. The “ethnic” Taiwanese also include the Yami of the offshore island of Botel Tobago, whose houses are built on piles. This is based on the analogy between house construction and cosmological ideas, according to which the substructure of the house embodies the underworld, the central building the human and animal world and the strongly pronounced roof the world of the gods. This construction method was already common in the Levantine Neolithic period and was known throughout the Old World. Apart from this, Formosa has a number of house forms such as flat pit houses, thatched houses or buildings deepened into stone plateaus, which show a significant similarity to the building forms of ancient Japan (Kofun cultures, Emishi). The cultural complexity of Formosa can be seen in the building forms. 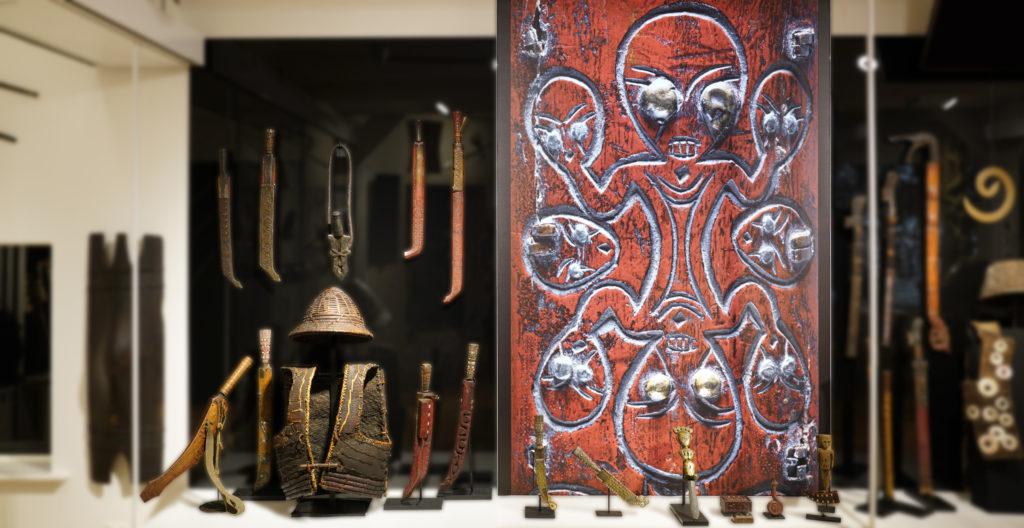