Start › You can leave your head on › Sulawesi 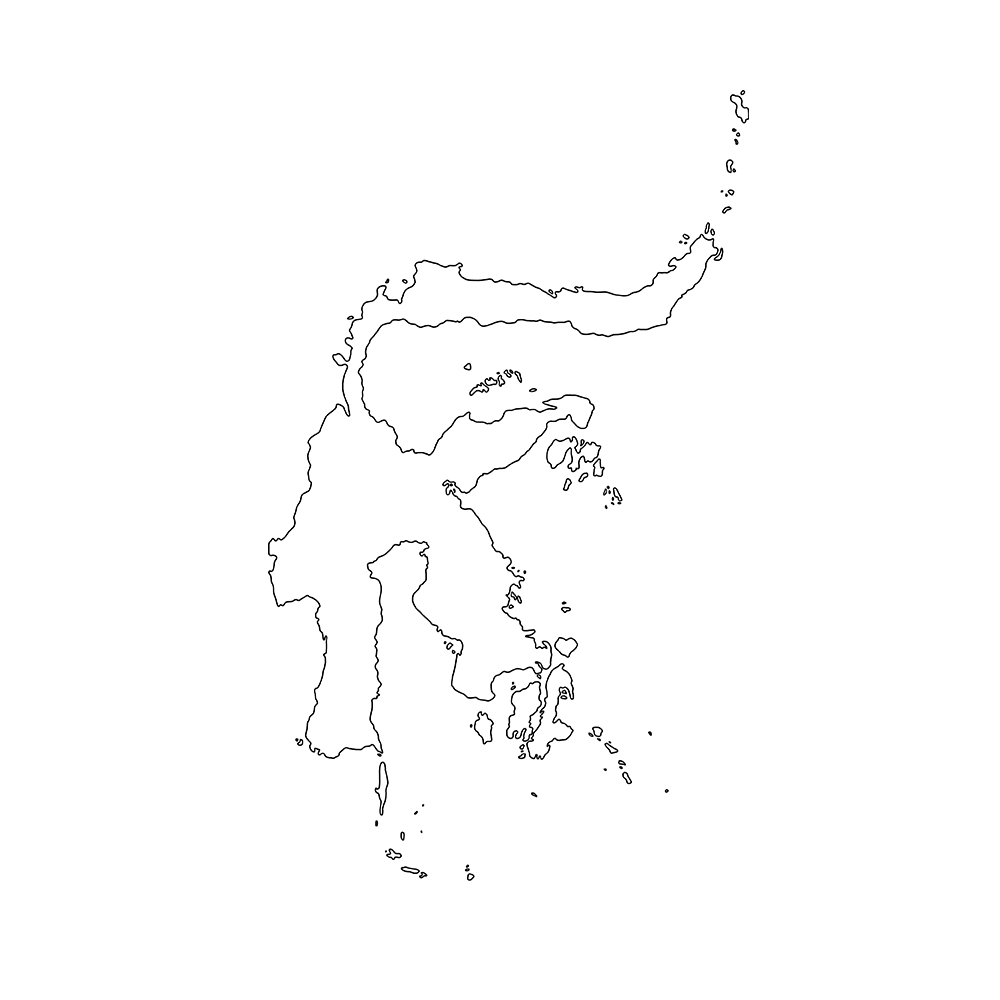 The island of Sulawesi, one of the large main islands of Indonesia along with Java, Timor, Sumatra and Borneo, has a maximum extension of about 1000 kilometres (diagonally) and rises to almost 3500 metres above sea level. The surface is 189.216 km². The comma shape traces a mountain range in the interior of the island, the highest peak of which is Mt Rantemario. The difficult topography has had a major influence on the cultural history of Sulawesi. While the coastal and lowland areas have been dominated for centuries by Muslim Bugis, Makassars and Mandan, who had active contact with Muslim empires such as the Ottomans and Safavids; less is known about the population in the mountainous interior. Nevertheless, the cultural and historical links between coast and hinterland are obvious. The difference lies in the way the economy is run, i.e. the formation of trade-oriented conurbations in the navigable coastal area and the self-sufficient inland area.

Sulawesi was inhabited by humans more than 100.000 years ago, as evidenced by finds of stone blades. The settlement of South Sulawesi by modern man is documented from about 30.000 B.C.E. onwards on the basis of radiocarbon data from Abris in Maros. Most likely the island was part of the land bridge over which the settlement of Australia and New Guinea took place around 40,000 B.C.E. According to the researcher Peter Bellwood, radiocarbon data suggest a southward migration of Australian Neolithic farmers who practised shifting cultivation. The Bugis, now the largest and most influential group in South Sulawesi, originated around the Tempe and Sidénréng lakes in the Walennaé depression. This is where the linguistic group that became the modern Bugis speakers settled for about 2000 years. The original name of this culture, preserved in other local languages, was Ugiq, which became Ugi and Bugi respectively. The Toraja are linguistically the closest neighbours of the Bugis. The Bugis society was organised in small chieftainships before 1200 B.C.E. The economic form consisted of a mixture of hunting and collecting as well as slash-and-burn agriculture with shifting cultivation. From the 13th century onwards, the increasing demand for prestigious trading goods and iron deposits from East Java, mainland Southeast Asia and, indirectly, China changed centuries-old cultural patterns. There was a tendency to build larger political entities. From 1400 CE onwards a number of agricultural principalities emerged in the western Cenrana Valley and on the south and west coasts near the present-day Pare-Pare. Sulawesi was Islamised since the 15th century. Before that, Buddhism and Hinduism were predominant among the elites, but they were strongly imbued with local traditions, especially on the quite autonomous administrative level of the villages and districts.

More recently, the inland inhabitants of Sulawesi have become known mainly under the name Toraja. The term means “people of the mountains”, borrowed from the Buginese language as to ri’aja. The establishment of the term Toraja goes back essentially to the Dutch missionary A. C. Kruyt, who rejected the name Alfuren, known from the Portugiese, for the inland inhabitants of Sulawesi, which means nothing other than “wilderness people” or “jungle people”, or simply: “wild”, from the Portugiese derived from haleferu from the Ternate language, which means “wilderness, jungle” there. The term is still applied to the inhabitants of the Moluccas, but is ethnologically meaningless. Today there are about 1.100.000 members of the ethnogenetic large group, which considers itself a “To-Raja”.

There are a number of subgroups of the Toraja, each speaking different languages or dialects. Of these, the Sa’Dan, Mamasa, Toala and Talondo are the most important groups in the west. The bare’e-speaking Eastern Toraja are also called Pamona or Pamuna after the strongest group. The Eastern groups do not see themselves as Tojara or Bare’e Toraja in general, but use their own names, including Kaili, Kulawi and Bada’a. Depending on the census, that is about 100.000 people. However, the Bare’e are also made up of a variety of groups based around Lake Poso, the Gulf of Tomini and Bare’e. Bare’e languages are spoken by everyone in East Sulawesi and can in turn be subdivided into local dialects. The Towana and To-Amoanaluite around Lake Poso are physically somewhat different from the other Bare’e, some of them showing a rather melanesque habitus. In them, the pre-Metallic Austronesian population of Sulawesi is very likely to continue in a stronger proportion. The Toraja traditionally cultivate dry rice in shifting cultivation; wet rice was only introduced by the Dutch around 1905. Maize is also cultivated, but is considered a low-grade foodstuff. The course of the year is divided by rituals, which include harvest festivals, rites of passage, merit festivals and inauguration celebrations, such as for the ancestral homes, which in the Toraja can rise to form monumental colossal buildings over 20 metres high. In a typical Toraja village there are 40 to 200 people living in 2 – 10 houses. Each house offers shelter to 4 or 6 core families; however, sometimes up to 16 families are accommodated in one house. Some groups, like Onda’e and Lage, also build “single-family houses”. Due to external threats, including headhunting, reinforced “hill forts” were formerly established, where people withdrew in case of an alarm. The tongkonan parent house embodies the clan to which it is assigned in an almost intimate way. The status of the tongkonan unit is largely determined by the line of ancestors and by the size and quality of the festivals it hosts or finances.

Social rituals including head hunting can only be explained against the background of mythology. Ritual life and cosmology manifest themselves most clearly in the tribal house, tongkonan. As everywhere in South East Asia, the structure with the supporting beamwork, the enormous gabled roof and the set-back living space embodies the division of the world into three levels – underworld, middleworld and upperworld – which can be broken by the high ancestors due to the activities of the living. The cosmological model underlying the entire ritual life is determined by this tripartition, which is dominated by duality in the form of the deities Laki and Ndara. Tongkonan are the centre of social life and illustration of cosmology. The equivalent of this is the World Tree, in which the roots, trunk and crown embody the same division. The division of the social order into three classes, namely slaves, free and noble, is equally represented by both manifestations. The maintenance of the social order thus means the stabilisation of the natural world order, and social activities such as ritualised warfare with headhunting, which catalyse, cement and confirm this order. 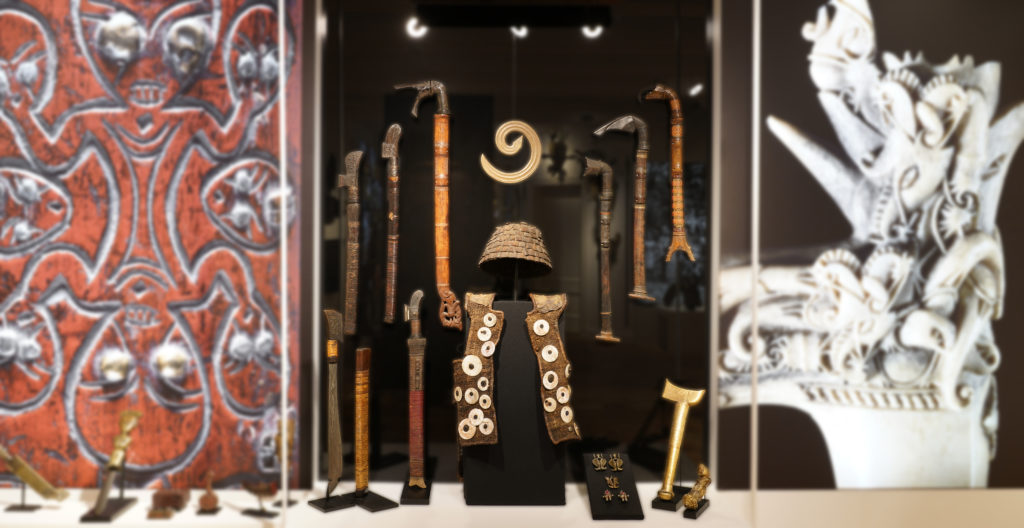